The book was launched on 1 October and has been well received. The aim was always to fill the gaps in current publications and not to cut across other excellent books. The book looks at the development of the military motorcycle which was in fact driven initially more by manufacturers and riders than by the War Office itself. It is interesting that 100 years ago motorcycle manufacture initially continued as normal before more facilities and resources were required for the war effort. The book ends in 1919 as Douglas and Triumphs were piled up at Kempton Park Race Course waiting to be “re-manufactured” by their original makers.

It was perhaps fitting I run into Chris Orchard co-Author of British Forces Motorcycles 1925-45 at the October Kempton Pk Bike Jumble. Chris explained that he was currently working on a revised copy of the book which is currently out of print. For those who own (or think they own) a military motorcycle BFM is an essential reference book dealing with individual machines and technical specification. It sounds as if the new book will widen its timescale, although as we both agreed pre 1925 is a challenge because of a lack of records and post WW2 presents a similar problem due to many records still being classified. 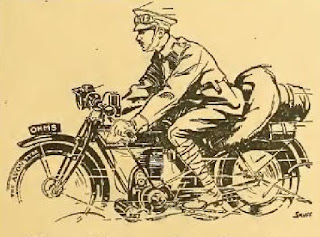 If you have any information from Brothers Fathers Uncles etc please get in touch at Warbike@fenlandclassics.co.uk One other piece of unfinished business concerns commemoration of Phelon and Moore testing at Brooklands. We need a P&M machine to photograph on the Brooklands track as a reminder of the part played by these machines in the service of the Royal Flying Corps. Please get in touch via the email above if you have access to a P&M we could borrow for a half day shoot.

Research projects have a habit of throwing up new information about other areas of history, such as testing at Brooklands and the three motorcycle events held in 1915. There was not room in the book to cover the Brooklands WW1 story, so we are currently working on a separate publication covering Brooklands motorcycling 1914-18.

This period is currently covered in print, and is quite rightly dominated by the development and manufacture of Aircraft. However, the Red Cross Field day, testing, military meetings and Royal Aircraft Factory meeting and continued record breaking provide more than enough for a reference book that will be available sometime during 2016.

Whilst the existence of the military events was know about and is even featured in film on one of the Brooklands Museum DVDs it was a revelation to piece together the names of the people involved and identify them in photos of the event by their race number. It really bought the events to life; and this was taken a step further when I was asked by Brooklands Museum to commemorate the events at the Great War 100 event on 27 September.

I am indebted to the twenty or so owners who brought their period bikes and took part in a re-run of the Serpentine event and race starts. We even had a bicycle take part! As for the future; if it is up to me there will be another event. 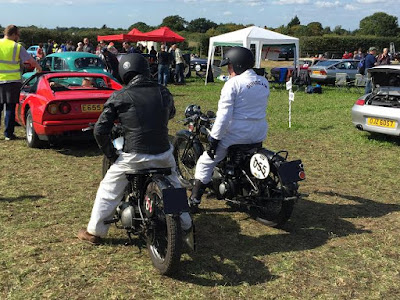 In early September we were let loose at the Shere Hill Climb as part of the Brooklands Trust Team. The story began sometime in July as I decided to use the event to test Aspen Ethanol Free Petrol. This was never going to be a scientific test, but we just wanted to see how it would work in a 1930's engine.

As we all know Ethanol attacks many of the parts that we rely on such as fuel tank liners, carbs and even some petcock corks. 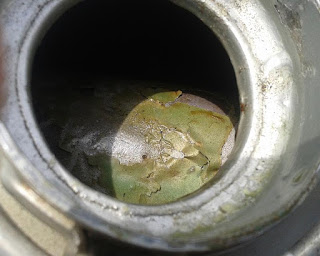 I have recently seen firsthand damage caused through exposure to Petrol including this tank liner which has been attacked by Ethanol.

We have also recently been working on an AJS which had a stodgy mess in the bottom of its tank. This muck extended down into the carburettor, which lead to a lot of work before it was fit to be used again. Whilst the AJS problem was one of evaporation rather than ethanol my research has shown that Aspen also has an extended life, keeping fresh for 5 years meaning that it could also make a good storage fuel.

So back to the Hill climb preparation. The 250cc Sunbeam was drained (no liner) and the carburetor cleaned. The first fill of the tank with Aspen was cut short after one of the petcocks leaked. This is when, with the aid of the Federation of British Historic Vehicle Clubswebsite I discovered that cork also could be attacked by ethanol.

The second attempt with the fuel, sold primarily for Horticultural machinery, was much better and the bike started immediately. It ran for about 15 minutes including a few runs on the Brooklands Banking.

The bike felt normal and the acceleration was good. Other than a slightly different exhaust smell all was the same as normal.
During the week before the event I took the bike out for a full test run and apart from wet sumping all went very well.
Come the day of the Hill Climb I was having a few continuing oil issues, but as far as fuel was concerned the Aspen performed well under load up the climb and on the return which involved running on public roads. I was also conscious that the bike was starting better than normal.

So, a non-scientific test which will continue as I see what happens to the components over time. One of the main benefits for me personally was the lack of smell. When working on bikes I find that pump fuel hangs around on my hands and cloths etc. Whilst the background aroma of petrol and oil makes for a proper shed ambiance, the strong smell of pump fuel gives me a headache. Aspen has hardly any smell and no noticeable lasting aroma meaning that I was not experiencing the usual petrol smell as I drove the bike away in the van.

It seems that this is one of the reasons that the product was first developed; so I met up with Eddie Bocquillon of Aspen to find out more. Eddie explained that the fuel was developed in 1988 by Roland Elmang, a Swedish chemist to help deal with the affects of normal petrol on forest workers working with chainsaws for long period. Bending down, they were breathing in the exhaust fumes leading to headaches and potential long-term health issues. I was shown two of Eddie’s party pieces. First he presented me with a jar of Aspen with a piece of expanded polystyrene floating on top, which he tells me has been in the jar for three months. I was given a jar of pump fuel and invited to float another piece of polystyrene. I placed the polystyrene in the pump fuel which immediately consumed it within about 15 seconds leaving no trace. I was given the test kit to take away and now after seven months in the Aspen the polystyrene is beginning to absorb the fuel but it is still holding its shape even down to the moulding marks. The second demonstration had to be done in pictures as we were standing opposite the Goodwood Pits, but Eddie likes to set fire to a plate of pump fuel followed by a plate of Aspen. This demonstrates the clean burn of Aspen compared with pump fuel and can be seen below. 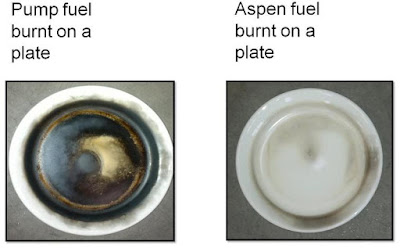 Eddie went on to describe where Aspen, more properly known as Alkylate petrol fits into the crude oil to fuel refining process. It all seems quite complex, but essentially Alkylate petrol could be described in layman’s terms as gases from crude oil distillation resulting in clean burning and exceptional antiknock properties. As a result Akylate petrol contains less of the harmful ingredients of pump fuel, no ethanol and has a storage life of five years! This link provides more technical information and the table below provides a comparison with pump fuel.

So, is Alkylate Petrol the answer to all our ethanol woes? Not quite. The fuel is only currently available from horticulture outlets and is more expensive than pump fuel. However, it does make a viable alternative to flush out the pump fuel on the last runs of the season if your bike is being stored for the winter. As ethanol free pump fuel becomes harder to locate accurately and ethanol levels are increased it could become the only real alternative. I was very impressed and we will certainly continue to use it in the Sunbeam as part of an ongoing trial.

We have put the new website on hold until next year and continue to source interesting original and re-manufactured items. Warbike: British Military Motorcycling 1899-1919 will however be available via a temporary page at www.fenlandclassics.com shortly.

WARBIKE: British Military Motorcycling 1899-1919 Is available at the special launch price of £8.50

Old Timer
Posted by Old Timer at 15:04 No comments: