By our standards July was a relatively quite month, but it has given us a chance to catch up on some research, fettling and of course chilling out at the Goodwood Festival of Speed. 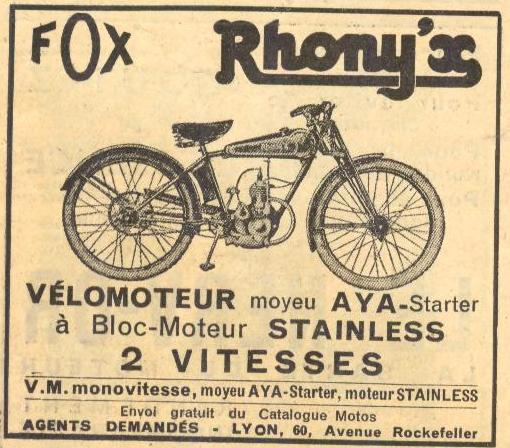 We are continuing work on the little French Rhonyx we rescued. Our contacts in France tell us that the Marque, based in Rhone in the 1920s to 30s relied heavily on word of mouth and were not big advertisers. Consequently the motorcycling press of the day did not write anything much and there is next to nothing out there in print. We have however found some similar examples and are slowly gathering more about the model and the engine which was manufactured by the Rhonyx Company under the brand of Stainless. If you have any further information we would love to hear from you at: info@fenlandclasics.co.uk


Whilst researching the All Our Yesterdays piece it occurred to us pretty soon that the motorcycle news stories would begin to come to an end as the 100 year anniversary of World War One was reached. We subsequently decided that it is important to ensure that we document as much information as we can about bikes of both wars and so the War Bike Project was born. For now we will be concentrating on WW1 hoping that the interest in the anniversary will prompt more information from private archives. You will have seen from "All Our Yesterdays" that we have already captured some information about testing and procurement of motorcycles by the war office and research now continues for the remainder of the year with the Imperial War Museum and other sources. We already have some information from Club archives as well as ‘My grandfather rode this bike, do you know what it is?’ requests. This information will begin to create a feel for the motorcycle’s place during this period. If you have and information, documentation or pictures you would like to share with this important project. Please contact warbike@fenlandclassics.co.uk We aim to find an appropriate archive for any original unwanted documents after scanning for better accessibility. This is important history and needs tio be saved.

My first visit to the event must have been about 15 years ago; I was expecting a static event of a few cars at the side if the Racehorse track. Not only did I get the venue wrong, this was NOT a static event. For anyone who does not know, The Festival of Speed is an event dreamed up by Goodwood’s owner Lord March to bring motorsport back to the estate and to allow visitors to get closer to the action.  The Event has celebrated its 20 birthday this year, and its huge success is due of course to all of the organisers, but it is the format that makes it so popular. At its heart is a hill climb event, but It is the overall format which has made it so popular with entrants and visitors. There is a relaxed atmosphere where superstars of motorsport mix with the crowd and where those who are passionate about the machinery can get up close and chat to the mechanics and owners about the history of the vehicle in question. If that is not enough those same vehicles worth thousands, even millions of pounds will be seen running up the hill either with a timed lap for the competition, or as part of a “parade”. Each year the event has a theme in addition to many anniversary celebrations. This year the theme was “The best of the first 20 years” and one of the most notable celebrations was 50 years of Mclaren. This year it was Porsche that were celebrated on the iconic artwork in front of Goodwood House. There are acres of stands and static exhibitions as well as Stunt bikes, BMX and not to mention a 2 mile Rally Stage. This piece really does not do it justice, but if you love motorsport, check out the website for next years event. If you can’t wait that long The Goodwood Revival is held on 13 to 15 September 2013 at the nearby Circuit. Another fantastic event....Just check out the website.
Click Here for a video of Highlights of the last few years
Images:
﻿﻿ 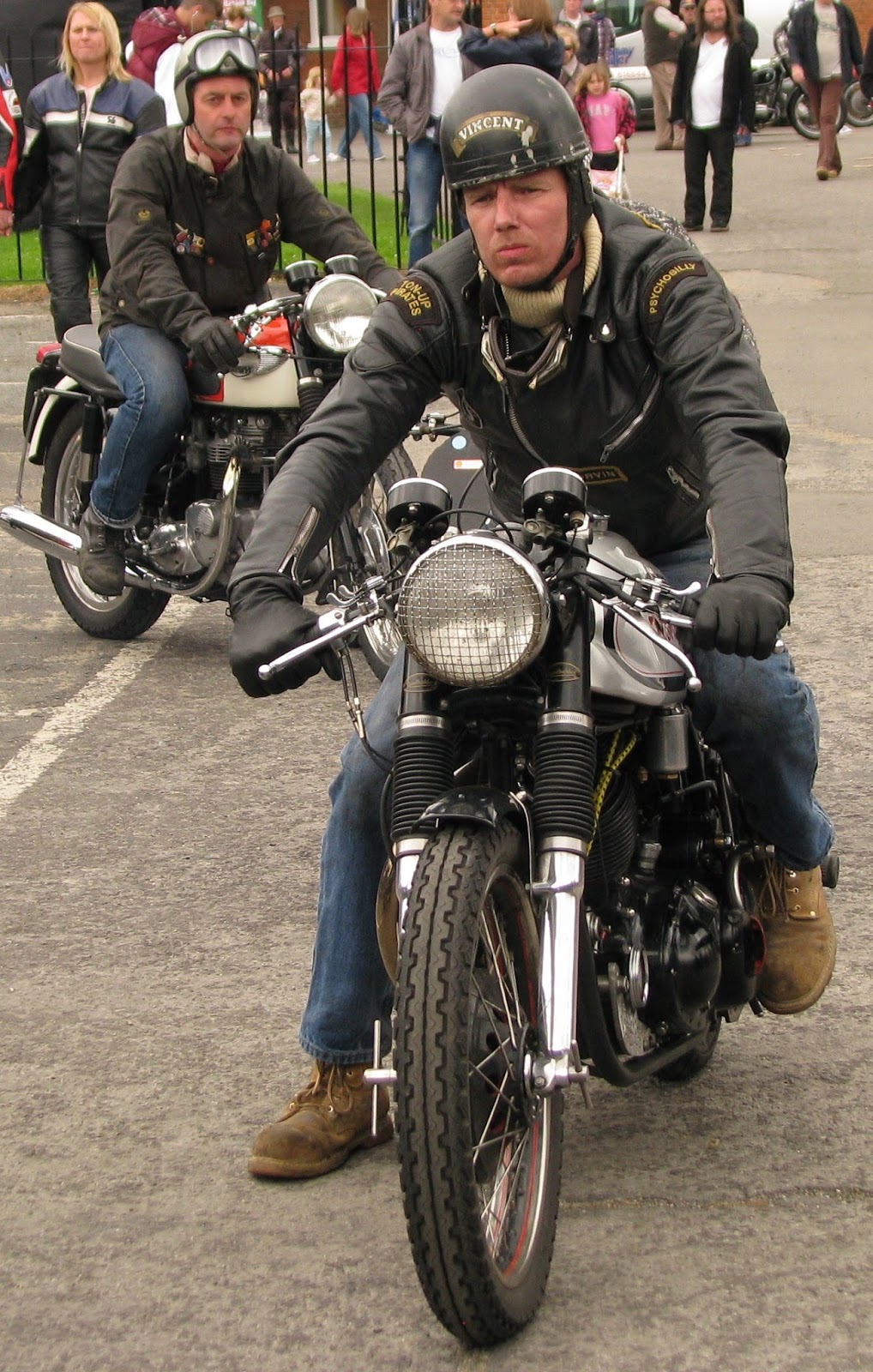 The main focus of June was on Ton-Up day at Brooklands Museum This event was billed as a celebration of 75 years since the opening of the Ace Cafe on the North Circular Road in London and the venue much loved by the Cafe Racers and Ton-Up boys of the 1950s and 60s. A one off event is a hard one to pull off as you have no baseline. The publicity is key and when you are a museum that has to look after the pennies it takes a lot of hard work by a dedicated workforce of volunteers to pull it off;  and pull it off they did. On the day there were about 2500 visitors and 585 bikes on the site and they were treated to a host of attractions such as The Smiths Triumph British Superbike Team, The Dick Shepherd Triumph collection, Sammy Miller, club stands, Bike related films, Trials displays, The Royal Logistics Corps Museum, The London Motorcycle Museum two Test Hill sessions, and of course Lots of Cafe Racers.

The weather was overcast, but apart from a brief shower before the gates opened it stayed clear all day with a good bit of blue sky over lunch. The morning’s entertainment began with the Sound Stage. This was a chance to get up close and personal to race bike through the ages as they were started up by their owners. Sammy Miller ran his V4 AJS and V Twin Motor Guzzi which he later ran up the Hill. There were too many to list, but its far to say that the bikes got quieter through the ages. The biggest applause went the both the Miller bikes and the Loris Capirossi flame spitting Ducati. 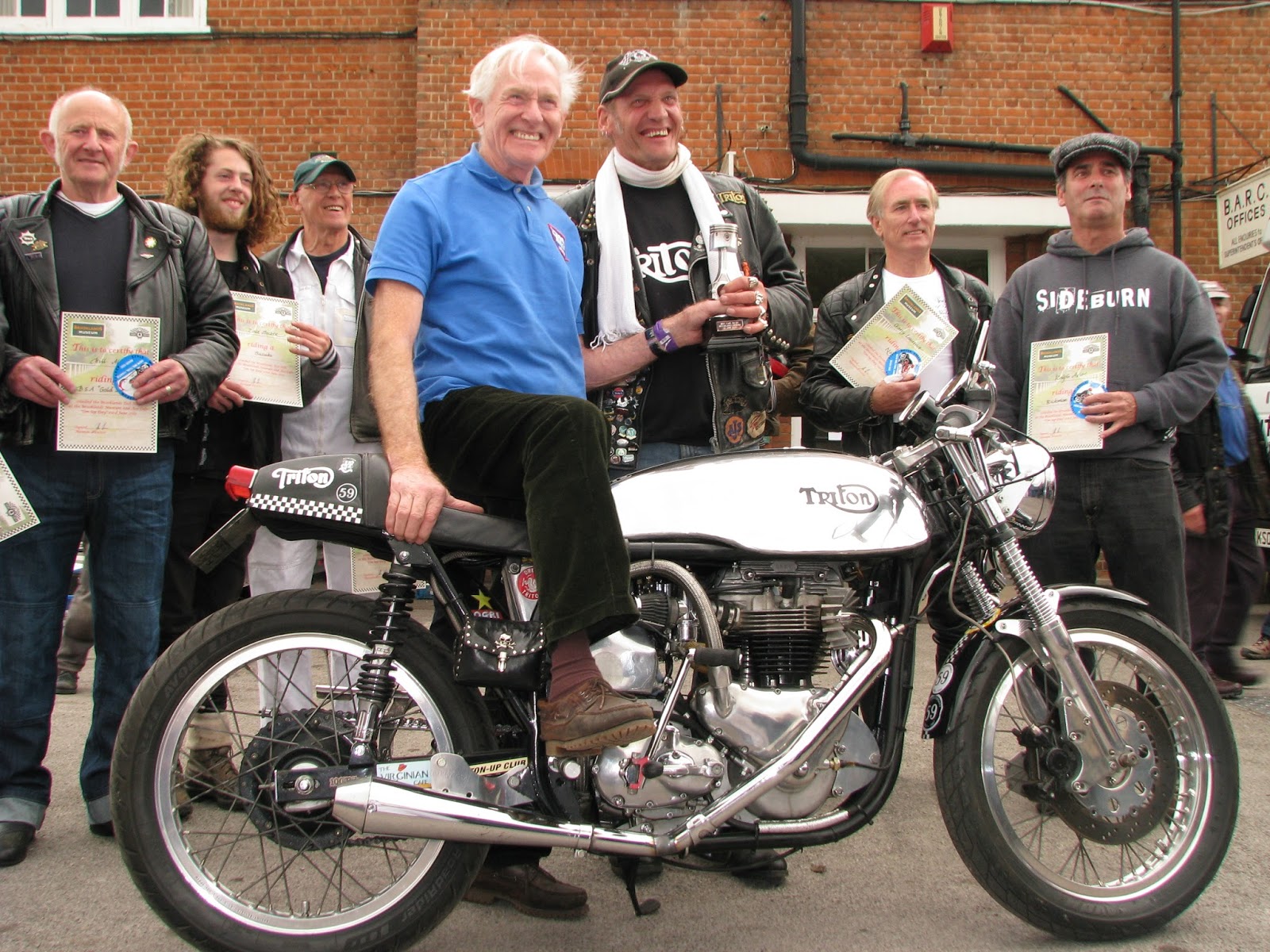 Let us know via email or Twitter if you would like to see a similar event next year.

See Films of the event Below:

More information about those who took part can be found at:

We hung around long enough to catch the HSF Cart race at MB World Brooklands.  This race was an endurance event with some 35 carts supplied by Daytona Raceway acting as transport for a variety of teams. The two hour race which included fuel stops and driver changes ended with just over 2 seconds between first and second. The action was very fast and furious and just very exciting, close motor-sport. Everyone seemed to enjoy themselves including a local F1 team (Mclaren) who managed 5th overall. The real winner was of course the Foundation which raised £58,000 from the event which included a prestige prize giving event at the Brooklands Hotel which overlooks the track.


To see more about the event Click Here
www.henrysurteesfoundation.com for more information about the Henry Surtees Foundation

We dropped in on the Bonhams Auction on 15 June to keep an eye on a few lots for rescuing. As it turned out the prestige nature of the sale brought out a lot of interest and the 1927 Barn find AJS 349cc K7 estimated at £1k to £2k went for £10,580*. Another wreck, the 1951 490cc Norton International went for £7,130*. Someone with the buyer was heard saying ‘He’s completely mad, but he knows what he is doing’. And so he does. That is over £30k of bike when restored.


There was a tidy 1922 ABC in need of a tidy up estimated at £2,500 -£3,500. In the end it went for £5,290*. These bikes are wonderful and sum up the experimentation that was going on at the time. Designed by the great Granville Bradshaw, this is a horizontally apposed, engine leaf sprung back and front, chain drive when belts were sill in use, good (for the time) drum brakes, but no kick start. In their day they were very much more expensive than other contemporary bikes and this, combined with engine lubrication issues eventually spelt the end for the ABC.


There also was an Ajax ladies motorcycle, thought to be unique. It went for £3,335* and we are very pleased to se it went to a museum. This is the type of bike that gets forgotten as it is now well known and therefore does not command a high price even though it is probably the only one of its kind and is fully restored.


Last but not least was a Brooklands Special SOS estimated at £3,400 to £3,800. This bike has been floating around the sale rooms lately and it was nice to see it go to a private owner who is passionate about its history. We were also lucky enough to catch up with the owner as he dropped into Brooklands Museum to find out a bit more about the bike whose first own was Tommy Meeten who liked the bike so much he bought the company. Whilst this comment not strictly true the Meeten story is an interesting one and more can be found on the Meetens website
Bargain of the day must be a 1979 Honda GL1000 Gold Wing taxed and MOT’d which went under the hammer for £250 (£287 after commission). It appeared to be an impulse buy, it of a beast to transport, but why not ride it home! A bit too new for us, and a tad large for a pit bike!
Posted by Old Timer at 12:18 No comments: